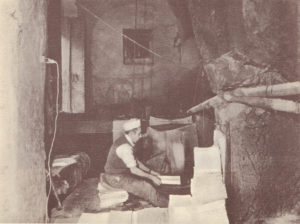 In Amalfi the paper-making process had following phases: the raw materials were rags, normaly cotton, linen or hemp fabric. These rags were put in stone tubs, called vats (in Italian pile). Their strong presence left imperishable signs in toponymy; infact the colonnaded road parallel to Ruga Nova, the main artery of the city center of Amalfi, realized after the coverage of the river, was named of Li Pili, still exists, moreover, even in neighboring Atrani. The rags in the vats were pounded and reduced to pulp by a series of wooden mallets, at the ends of which there were dozens of nails. The nails were produced by the iron foundry and factory in Pogerola. The shape and the size of the nails determined the consistence of the pulp and as a consequence the weight and the thickness of the paper shett. The mallets worked thanks to the power of the water, that falling on a counterbalance wheel(or big wheel) put into motion a trasmission shaft. When ready, the pulp was put in another vat and a special glue was added. This glue was obtained from animal hides (carnicciola).

A mould (cassio) was then dipped into the vat; this mould had a wooden frame and the watermark in the middle of a net of bronze or brass wires. The watermarks had the trademarks, that distinguished the paper-makers and the particular type of paper. The watermark also contains trademarks, which were used to distinguish not only the manufacturers of paper, but also the particular type of paper produced. Today, various examples of ancient watermarks are still preserved, one of which shows the emblem of Amalfi, the angel, the coat of arms of noble families from Amalfi, and the coat of arms of royal Angevins. 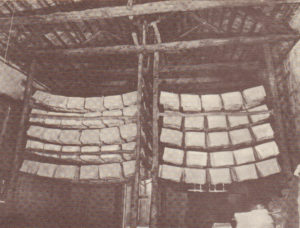 Was achieved in this way, a pile of sheets of paper very wet, which alternated as many felt. The pulp stuck to the mould forming a sheet, which was delicately transferred on a proper felt sheet. Again the mould was dipped and again the sheet was transferred on the felt, one on top of another, making a pile of wet sheets, alternated to felt sheets.  This pile was pressed, so that water would be squeezed out. Later the paper sheets were taken away from the felt, one by one and carried to the airing room to dry. The airing rooms were at the top of the building in order to have more ventilation.

The dry sheets were gathered and taken to another room to be smoothed, after having been accurately pressed. Here occurred the preparation, which consisted of a careful selection of the most valuable card, while the second choice was smoothed with the palm of his hand and bent with a machine named “piegatore”. Finally the sheets were collated into parcels. The main types of paper produced in paper mills in Amalfi were: ”carta strazza”, ”carta genovescha”, ”carta bambace”, ”carta di Napoli”, ”carta piccolo” and ”carta bianchetta”.

<<< Go to the previous  article