An ancient tradition narrates that this paper was invented in about the 2nd century B.C. along the banks of the rivers of magnificent China. It must have then travelled along the caravan routes to the Muslim centres of Persia and to the Syrian-Palestinian coast, from where it then spread to the Arabian countries of Spain and North Africa.

The first historical testimony of its existence and use in the Mediterranean is a letter written on this paper by the countess of Sicily in the first years of the twelfth century. This is certain evidence that the paper was already diffused in the island at the time of the Norman conquest and that it was produced in workshops along the African cost and in Spain. The Amalfitan people, who were present in Sicily and in the main harbour and trade centres of the Arabic  caliphates of Africa such as Alexandria, Cairo, Kairuan, El Medhia since the tenth century, were certainly the first to learn the manifacturing techniques of this paper.

A decretal of Frederic II, dated 1231, is the most ancient evidence of the use of this paper in Amalfi. In that year, in fact, the king of Sicily forbade the Amalfi people to write official documents on paper, inviting them to keep to the use of the traditional parchment, which could be better preserved. During the same century, moreover, a paper mill must have been already functioning along the Amalfi river, as an act seems to testify, in which you can read: 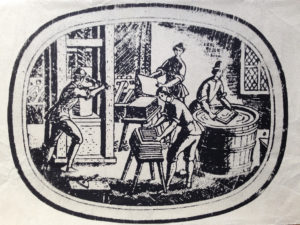 The term pila clearly signifies a sort of vat where the rags for the production of the paper were triturated. A will of 1268, dictated by the Amalfi merchant Margarito Marcagella, asserted amongst other things that:

So this merchant of Amalfi obviously bought cotton in order to process it into paper reams. Some years later, in 1289, a document of Ravello mentions the bambagina or bombicina paper, which is made with cotton rags(bombax).
This particular kind of cloth was one of the principal products of Amalfi sea trade, so much so that the Platea Bambacariorum, that is the cloth merchants’ market place, was present in the coastal area of the sea town in  the Middle Ages.