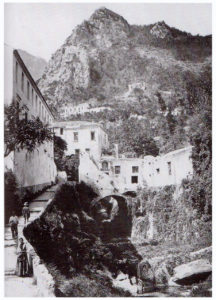 It has been proved that the Paper mills were introduced into the Amalfi territory during the thirteenth century. There was, in fact, a gradual transformation of the water mills: at the first stage they became fulling-mills, which provided for the fulling of the clothes using wooden mauls, and then at a second stage they became paper mills, as confirmed by a document of 1380, in which you can read: ”in quo predicto molendino facta est balkeria ad faciendum cartas bombicinas” .

Paper mills were built along ”Valle dei Mulini” owing to the presence of abundant water. This and easy access to cloth, thanks to the flourishing commercial activity at the time, made Amalfi one of the most important paper manufacturers. From the fifteenth century the need for public and private documents increased and this determined the installation of new mills. The number of mills grew, as Don Giuseppe Imperato affirmed, when it became obligatory for parishes to make transcriptions of christenings, confirmations, marriages and deaths. The paper mill activity continued to flourish even after the political decline of the town, above all due to the high quality of the paper produced and local manufacturers were so rich and powerful that they founded the ”Congrega dei Cartari”. This group met in the church Spirito Santo on the division line between Amalfi and Amalfi fore porta(the boundaries of the town).

The latter coincided with the production area in Valle dei Mulini. Towards the end of the XVII century F.Sacco states in his dictionary that they are sixteen mills in Amalfi and the Galanti dictionary, under ”Report to the King”, states that there are thirteen and that they are the best in kingdom. Franca Assante, in her essay ”The riches of Amalfi in the 1700′ s” underlines how these are represented by”â€¦shop owners, millers, but above all by mill owners, whose names are already well known, Amatruda, Bonito, Cimino, Lucibello, Taianj and Torre. These families awn a total of 12 paper mills with a total of 125 ”pile” (vats used for paper production) and appear in the land register with a net income of more than 1.450 ducats.

The Amatruda family, whose name derives from a feminine name of longobard origin, was resident from the 1198 in the hamlet of Pogerola and, over the course of the fourteenth century, participated actively in the social life of Amalfi. From the parchments of the Bishop’s archives of Ravello and Amalfi(VII, pg.85, n. CCXLII) it appears that in 1483, a representative of the Amatruda family of papermakers: Barnaba De Amatruda, who lived in Scala, exchanged some of his property in Campodonnico with the Monastery of San Cataldo. The oldest Amatruda watermark comes from that era. It shows a circle crowned with three Angevin lilys, with a scroll bearing the writing ”Amatrulo”.

The decline in paper production in Amalfi came towards the end of the XVIII century. In fact it was probably during thse years that they began working with machinery rather than by hand, thanks to the use of the ”macchina continua” or the ”continuant machine” which led to the abandoning of traditional methods of production. Such productive changes required large capital investments, which the families involved in producing paper certainly did not have. Bourbon protectionist politics, however succeeded in increasing production in the second and third decade of the 800’s so that, in 1861, in Amalfi, there were thirty eight active paper mills.